Generally speaking, all cigars are more or less the same in appearance: long and cylindrical. This shape is generally referred to as a parejo, meaning parallel in Spanish. Although many popular figurado shapes (such as Torpedos, Perfectos, etc.) are available today, the vast majority of premium cigars sold today are still parejos. 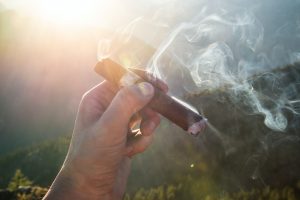 according to its ring gauge. Ring gauge is a unit of measurement divisible by 64. Most cigars have a ring gauge of 64 or less. There’s no real trick to this – the ring gauge system may appear confusing at first, but it is simply an antiquated system that measures the diameter of a cigar in units of 64 (64 is equal to 1 inch). Therefore, a ring gauge of 48 would be a 3/4? of an inch thick (48/64).

The parts of a cigar are divided into four basics: the cap (or tip); the head; the body, and the foot. The foot is the part you light and the cap is the part you cut off. A cigar is made up of three components: the filler; the binder and the wrapper. The filler is the “stuffing.” There are two general kinds of filler. 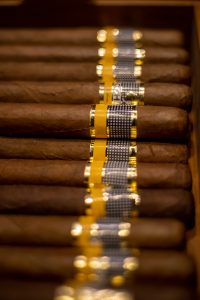 Lower-end cigars contain bits of tobacco leaf, known as short-filler, which are crammed together and shaped to fit a specific cigar size. The process is a lot like making hot dogs. In the same way a hot dog contains left over bits, short-filler cigars are made from scraps of premium fillers or sometimes rejected inferior leaves.

Higher-end cigars use long-filler tobaccos. This is where the inner leaves are rolled into a tube and run the entire length of the cigar. A cigar maker will blend different filler leaves together to create unique tastes and flavors, much like a winemaker crafts wine. Whether a cigar is made of short or long-filler tobaccos, the filler leaves are always secured within a leaf called the binder, which sits just beneath the wrapper. The tobacco is put into a wooden mold and pressed into shape for about an hour. All premium cigars – both short or long-filler – are labeled “hecho a mano,” which means made by hand.

Finally, the roller then wraps the bunch in a wrapper leaf which is supple, very elastic and visibly pleasing. The cigar is then capped and trimmed to uniform size. The finished product is aged at the very least 21 days and many factories age the finished cigars up to 24 months. A well-made cigar is one that’s firm but not tight and allows you to draw the smoke easily and consistently.

While there are many factors that go into selecting a cigar – including its construction, filler blend, quality of the tobaccos, wrapper, country of origin, reputation of the cigar maker, etc. – it’s ultimately a subjective choice, and all this contributes to the unique taste of a given cigar.